There is no doubt that the life of a leader is hard. Long hours and late nights are just part of the daily routine for these hard-working culinary champions, who operate in grueling conditions to deliver their dishes to us.

Talent plays a part, but it’s daring and passion that lead the best of the bunch on this difficult road to ultimate success. Some are ready to live in the kitchen, progress to the top, or happily support their comrades in the process, while others (due to change of inspiration or burnout) might reach turning points in their careers that place them. on another path.

This story begins with the journey of three chefs, who each took very different paths but ended up wandering the same gravel road through the Hindmarsh Valley, to visit a relatively unknown property with an old cellar door, a few dependencies and a vision. .

This is where Lost Phoenix Farm was born.

André Ursini was one of the first Chef candidates to get serious after television. After appearing in the show’s first season, he quickly became a successful restaurateur, with a string of venues open since his stint in 2009, including Andre’s Cucina (now closed), the much-loved Orso restaurant with wine bar adjacent Willmott’s Gastronomia, the exclusive, almost elusive, Villetta Porcini dining experience in the Adelaide Hills, plus a few side businesses that see Ursini’s food landing on tables everywhere.

An accelerated career built in various kitchens saw Will Doak join Ursini when he opened Orso in 2018. He was already a chef when he was just a few years away from his apprenticeship, but Doak’s rising talent hadn’t gone unnoticed and he hopped between Press*Food & Wine, on Orso, with a quick sidestep to help open Fugazzi, before deciding it was time to give the chef’s jacket a break so that he planned to step into the front of house role on the farm.

If Doak was going to trust anyone to deliver food to his standards while managing a new team, why not one of his former chefs? Enter growing SA talent Bridget Corver, who spent time working with Doak at Press* and Orso. A little research shows that Corver is not only a great chef, but also a bit of a dessert addict. I know how she feels.

Together, this newly formed community agreed on a concept for the venue and the menu, and the rest, as you might say, is right now.

We are seated inside the main dining room overlooking the manicured lawns and gardens. There are vineyards, open fields, hills and distant forests. Cows roam the paddock below. A wide veranda surrounds the barn-like building and the interior has been illuminated. Hanging pots of greenery hang from the ceiling via recycled ladders; beige walls with touches of dark green and different shades of wood make it the perfect backdrop for a long lunch. A DJ spins lounge tunes and classics from turntables set up under the enclosed terrace as we peruse the menu.

First on the pass are the anchovy fingers, the burrata and the tuna crudo. Lightly charred toast is topped with whipped ricotta and pepperonata, then topped with Olasagasti anchovies. The subtle sweetness is reversed by punchy hints of lemon. While the anchovy itself is a bit lost between competing flavors, there’s a satisfying salty finish to every bite. A version without pepperonata has more balance and allows the fish star to shine. 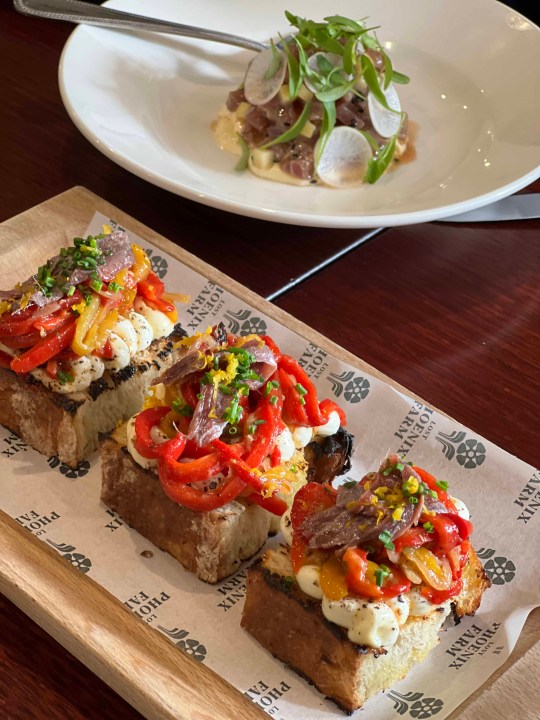 Then comes a kind of bright and jumbled salad, masking a half-ball of burrata. This new twist on a classic is a winner for its presentation and assortment of flavors and textures that culminate in nothing less than enjoyment. There’s acid in the orange segments, bitterness in the radicchio, and pungent herbal notes thanks to the mint and dill. The addition of pine nuts could bring this dish into Middle Eastern territory were it not for the addition of agrodolce and vincotto, two Italian sauces that compete for attention on the plate of pleasantly contrasting way.

And then a little Japanese influence shows that there are no strict rules here, while demonstrating that this is a cuisine that has traveled a lot, or at least knows the sauces, condiments and spices. A miso glaze evenly coats diced raw tuna and lightly cooked apples piled high on a silky divine mash.

Ultra-slow cooked local lamb has the meat crumbling on a bed of labneh that swims in lamb-making juices. The dish requires nothing else except a handful of mixed herbs on top. This simple style is also present in other main dishes. A coconut broth flows beneath mullet and pee from local vendors in Coorong and Goolwa respectively, showing that this region is a strong contender for some of the best seafood in the state. It’s fresh and flavorful, with the addition of herbs and bean sprouts pushing this in a laksa direction. 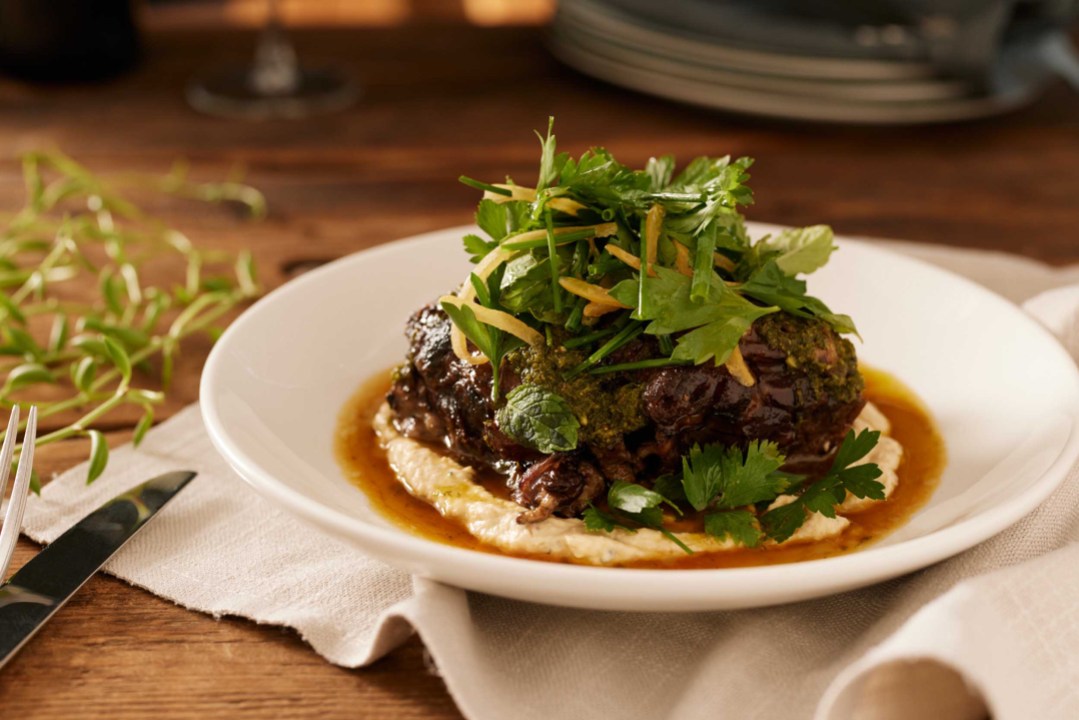 The most robust of the entrees is a breaded pork chop with its bone still intact. This helps the cut retain moisture and flavor on the inside, while the outside is fried crispy. Shaved fennel is drizzled with a creamy vinaigrette that has a hint of salt from capers and a fleeting fishy flavor from anchovies added to the mix.

It’s here that we realize (and acknowledge) that dessert can, in fact, be the most important meal of the day. A good sticky date pudding isn’t hard to make, but this one is something else entirely. Dense with a caramelized base, coated in a butterscotch syrup that barely had a chance to penetrate the slice, topped with lightly whipped cream. It’s heavenly. 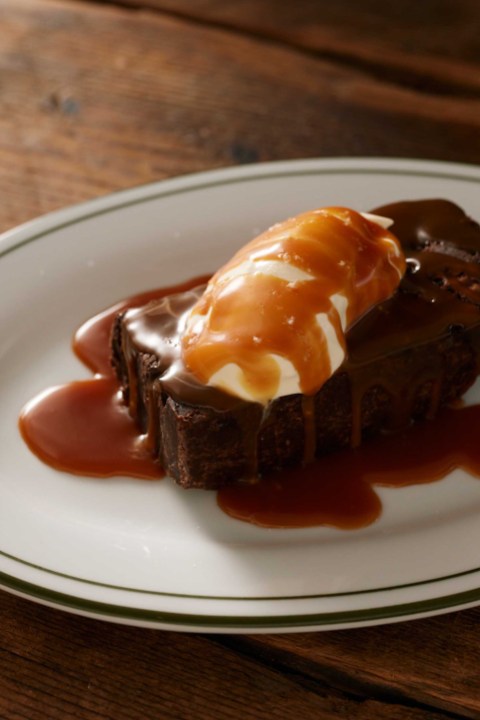 In their final act, the Lost Phoenix kitchen delivers a parfait made with olive oil. It sounds unconventional, but it’s delicious. The top appears to be some sort of lemon curd whipped cream, only enhanced by lemon syrup poured over the batch. Bursts of charred meringue add a little extra sweetness, crunch, and drama, though it’s not really necessary. We are already entertained.

And that’s the thing. It’s the overall vibe that sets this place apart from many other regional foodie destinations. It’s fantastic, it’s entertaining and above all, it’s different. You could easily spend half a day here, and we will do it again, if not for the view, then for another bite of that date pudding.

Your support will help us continue the important work of InReview in publishing free professional journalism that celebrates, questions and amplifies the arts and culture in South Australia.

When I had these inedible fries at the strikingly beautiful and architecturally beautiful Hotel Palma Blanc, one of the waitresses I complained to mentioned that the fries at Café Pino in Paseo Mallorca are worth having. to be tried. I had a very good meal at Café Pino a few years ago and I remembered […]

“The hydrangea hue, reflected in the rain puddles, just exists today,” reads the haiku on the cover of our omakase menu at the newly opened restaurant. Kiyose. Named after the term referring to the seasonal and intentional language used in traditional Japanese poetry, the refined restaurant kappo kaiseki occupies the space previously occupied by Yoshi […]

A hotel restaurant might not be the obvious dining destination if you’re not staying at said hotel, but after trying the food at The Maids Head in Norwich’s historic Tombland, I’m extremely glad we let’s get off the beaten track. When we first considered eating there, it was to sample their ‘casual dining’ offering in […]