Sometimes looking at a restaurant menu is like skipping through a gigantic selection of television programs on several channels: we spend a lot of time deciding where to click. I can take hours to make a decision when selecting dishesbecause I’m not just looking for something that I like or particularly like, but I’m looking for those dishes that will give me something interesting to write about.

What ultimately appears on the review page totally depends on what ends up on the plate: the better the dishes that come to the table, the more satisfying and entertaining the review. When making final choices, I also have to take into consideration the dishes I’ve written about recently, as well as those that are in the works and will appear soon.

Although I prefer to keep the review dishes as different as possible (variety is the spice of life) there are occasions when I deliberately write on the same dish two weeks in a row. This happens, for example, when I come across two beautiful versions of the same dish and can compare how the cooks made their particular versions.

It’s amazing how simple changes here and there can turn a ubiquitous recipe into something we’ve never seen before. However, sometimes it happens that the choice of dishes that produces a review with the right combination of gastronomic satisfaction more an entertaining read, is not so easy. If this little problem arises in an Italian restaurant (which can happen), I have an easy way to make a quick decision on the menu: I simply choose a pasta dish… or three. 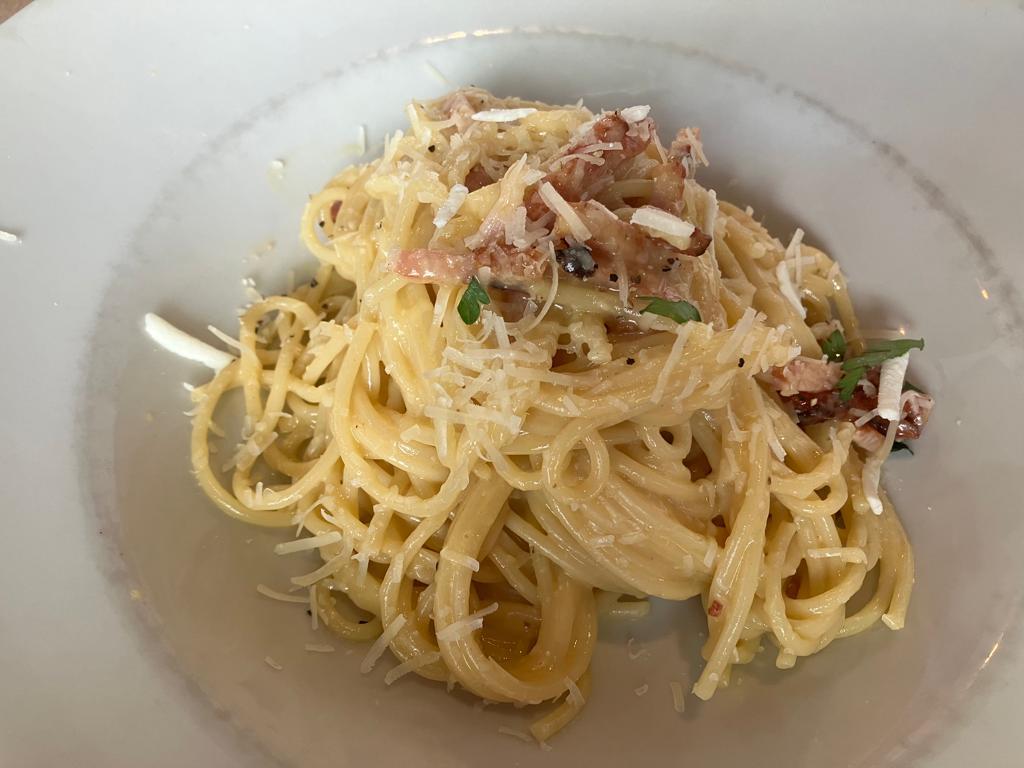 Arte Pizza is primarily a pizzeria, but they also have some interesting pasta dishes and this policy of selecting three pasta dishes worked like a charm. My three choices were linguine with pesto, spaghetti carbonara and tagliatelle bolognese. The kitchen ended up serving three aces, which is equivalent to three aces drawn from a deck of cards. However, selecting three potentially excellent pasta dishes is not enough: in an Italian restaurant, things can still go wrong unless we make sure the pasta is cooked to an al dente degree that suits us. I usually tell the server that I prefer my pasta a little more cooked than the traditional Italian al dente method. And if it’s long pasta the result is more than acceptable.

Short pasta is another story: it’s usually way too al dente and can be so overcooked that it’s almost half raw. At this point, it ceases to be pleasant. For some time, I stopped ordering short pasta in Italian restaurants. If there’s an Italian cook in the kitchen, it’s also a good idea to know where he’s from: it’s bad news if he’s Neapolitan. Italians from other parts of Italy can’t stand the Neapolitan concept of al dente: even for them it’s far too hard and inedible. So what chance is there for us? 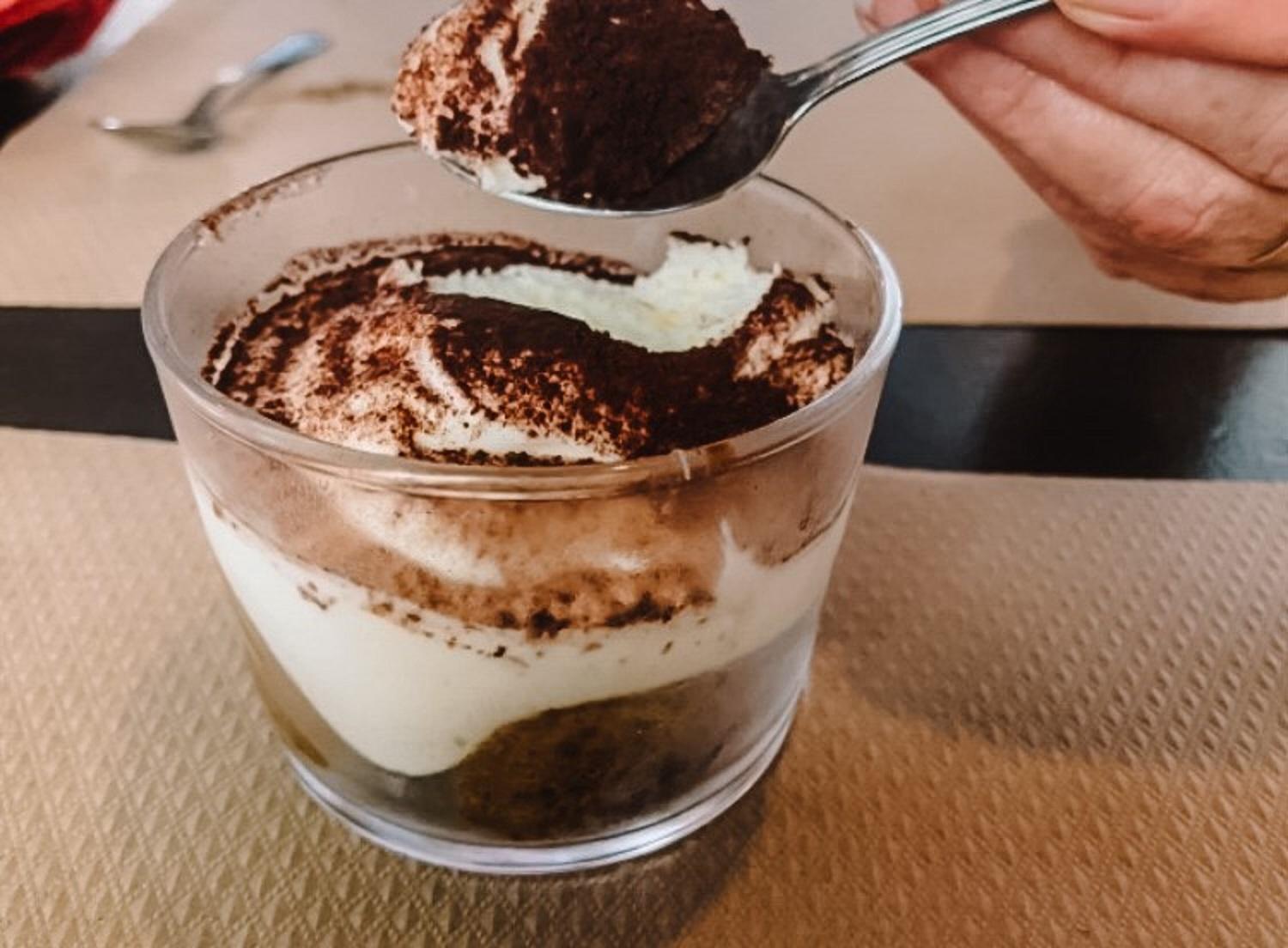 In the recent past, when I had ravioli a few months ago, I told the Neapolitan cook that I was writing about his restaurant and that I preferred my stuffed pasta to be a little softer than the Italian al dente usual. But he ignored my requests: the ravioli were way too hard on the edges. There is nothing mischievous about the Neapolitan cooks: they even think they are doing us a favor by teaching us to appreciate their idea of ​​al dente pasta.

In the end, no al dente difficulties at Arte Pizza: all three pastas were well prepared and completely to my liking.

There was no problem al dente at Arte Pizza as the three pastas were perfectly acceptable in every way. It really makes a difference to pasta enjoyment when cooks reach just the right al dente point. The most successful of the three pastas was the linguine al pesto, partly because it was well lubricated with the sauce but also because the pesto had a rich basil flavor.

Pesto should always have an intense basil flavor, but that doesn’t always happen – and when it does, I’m forever grateful. When I eat pasta, I’m like the Italians: I don’t want it to be drenched in sauce. But there is an exception to this rule: I prefer a lot of pesto. This one had high amounts of basil in it and that’s one of the reasons I gave it a 10.

As spaghetti carbonara must be supplemented with raw egg yolks, a culinary method that health authorities do not tolerate, some restaurants avoid putting it on the menu. The serious cooks who offer it, try to obtain the necessary silky finish without adding cream. This was the case at Arte Pizza and their version was most enjoyable, the small pieces of bacon being very crispy and tasty.

Their tagliatelle bolognese was particularly meaty and rich. The tiramisu wasn’t among the best I’ve had, but it was way better than most – and the price was very decent.

It’s pizza and pasta here, all cooked to a high standard and reasonably priced.

Tim Lichfield try an eight-course tasting menu in the heart of York Legacy is York’s new luxury dining experience, located in York’s only 5-star hotel, The Grand As soon as you arrive, you are welcomed by competent and friendly staff who accompany you to your table. Afterwards, you can admire the restaurant’s expertly designed interior, […]

CapitaSpring, one of Singapore’s most iconic skyscrapers, boasts sweeping views of the cityscape and huge rooftop space. What better way to utilize the new floor plan than to combine the intricate art of urban farming with a 51st floor food court? Hot off the heels of the launch of Latin European bistro, Sol & Luna, […]